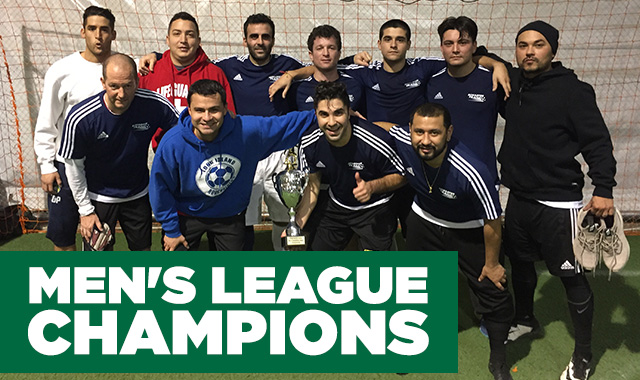 After weeks full of hustle, grit and determination the season finale was finally upon us. As three teams still had a shot at the title coming into the final week everyone was on their A game. Who came out on top? Keep reading and find out.

The first game was just an appetizer for the night as PBD Academy took on Nassau United in a friendly match up that was played for pride. If this game was considered the appetizer then this was a filling meal due to the great action on the field that filled your eyes with delight just like food fills your stomach. The back and forth action with no team pulling too far ahead throughout the match made it fantastic entertainment. However PDB was just a bit hungrier as they pulled out the win by the score of 5-4. Both Thomas Gelardi and Kieren Wallis scored 2 goals each for PDB.

The second game was the main course as Alemania took on Sporting FC. If Alemania won the match they would be crowned Globall Sports Center Champions and would receive the most alluded trophy in all of sports the Globall Sports Center Trophy. This was also a repeat of last season’s championship game as well where Alemania beat Sporting to claim the cup. Sporting didn’t have a shot this season but they wanted to be the spoilers tonight. Alemania jumped out to an early 3-0 lead and looked as if they were going to run away with the game, but Sporting did not want history to repeat as they stormed back to tie the game at 3-3. Alemania re-grouped and charged back ahead but didn’t relinquish the lead the remainder of the match as they won the game and the trophy by the score of 6-4. Both Antonios Papasenastos and George Spanos scored 2 goals for their squad. This game was definitely a steak dinner with a twice baked potato on the side.

The desert game of the night was the battle for the silver medal as the winner would claim sole possession of second place in the league. The two teams were Forest Park and Molon Labe and let’s just say this game was like apple pie Ala Mode. Both team really wanted the finalist trophy but Forest Park wanted it more as they came out on top by the score of 7-5. They were carried to victory on the shoulders of Jonathon Jaramillo who had and hat trick and Elmer Umana who scored 4 goals.

What more can you say? What a fantastic season finale to cap off a fantastic season overall. Tune in as Winter II kicks off next week January 23. Will Alemania get a three-peat next season? Will Zach Gould (15 goals) win the golden boot award for the third time in a row?

There’s only one place you can find out those results, Globall Sports Center!

You got game? We want you to play!