Mariano is back with Rough Riders! 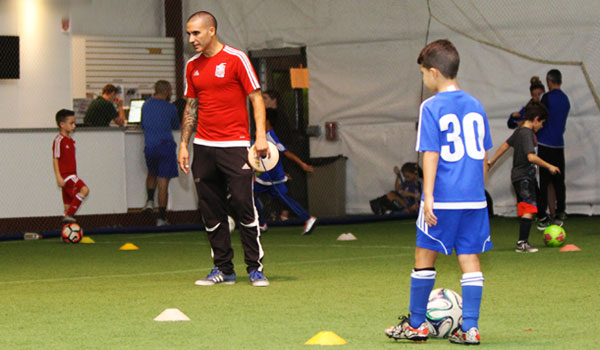 It has certainly been a while, but we couldn’t be happier that this guy is back.

After a two-year coaching excursion in Hawaii, Mariano Belen (more commonly known as Coach Mariano) has decided to return to the Long Island Rough Riders.

Mariano, who came over to the United States in 1996 from the Argentinian capital of Buenos Aires, joined the Rough Riders in a coaching role back in 2001 and quickly established himself as a valued member of the staff. 15 years later, he returns to the club looking to pick up right where he left off.

“My two years in Hawaii were great, but I’m really happy to be back with the Long Island Rough Riders,” Mariano said. “The culture that we have here is unlike any other place and I can’t wait to get back to work.”

Mariano has been surrounded by soccer for as long as he can remember. He was introduced to the sport when he first learned to walk and has been involved with soccer ever since then. After spending many years in various Columbian soccer academies, he earned a contract with the New York Fever in 1996, an A-League soccer franchise based in New York City. However, he provides so much more than experience as a coach.

“Mariano played at a very high level and is passionate and knowledgeable about soccer,” Flavio Ferri, the Rough Riders’ General Manager added on Mariano.  “He has the innate ability to connect with youth players and inspire and teach them.”

In his return to the Rough Riders, Mariano will be coaching various camps and clinics in addition to his role as a Jr. Rough Riders Premier coach. He will employ his sensational technical background to teach young players in our futsal and ball mastery classes.

Coach Mariano was vital in the growth of the Rough Riders when he first came to the club in a coaching role nearly 15 years ago. In his return, Mariano will attempt to have a more substantial impact than he did in his first stint with the Club.

Mariano’s effect on his players is hard to describe. I spoke to former Junior Rough Riders, Taylor Barnard and Maeve O’Sullivan, who attempted to explain how big of an impact their former coach had on their soccer careers.

“Mariano was one of the best coaches I have ever worked with throughout my years of playing soccer,” O’Sullivan added about Mariano. “He was so enthusiastic about everything and genuinely loved the sport of soccer which really made me want to work harder as a player. He helped make my experience as a Rough Rider unforgettable.”

“When I played for Mariano, he always brought a very relaxed, yet energetic environment,” said Barnard of her former coach. “He has a very unique style of coaching. He liked to keep the ball on the ground and have everyone play their game. He was always so positive.”

When I asked Mariano to describe his style of coaching, he only had one word to say: “passion”. This just speaks to his understanding of the game. He believes that soccer isn’t just about winning, but it’s also about enjoying the game and having fun with your teammates.

Mariano has provided so many kids with an incredible experience as a mentor and will look to do the same in his second go-around with the Club. Expect more big things to come from one of the best in the business.

Oh, by the way, he’s a huge Lionel Messi fan as well.