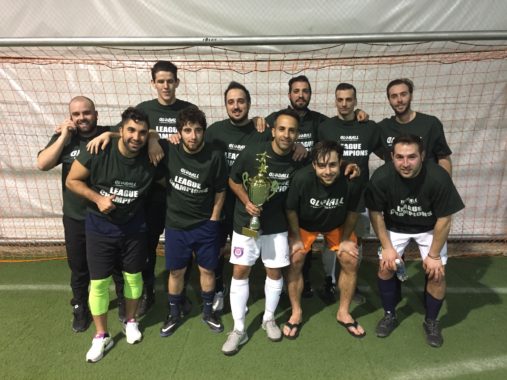 The date was January 22nd, 1973. George Foreman stepped in the ring to take on the undisputed heavy weight champion of the world Joe Frazier. As the two undefeated fighters squared off in one of the most historical fights in history with Frazier being the favorite to win the fight. That was until Foreman laid an upper cut right underneath Frazier’s jaw causing him to fall to the ground followed by the famous words of Howard Cosell screaming into the microphone “Down goes Frazier, Down goes Frazier!” It was at that moment Foreman took full control of the fight and TKOed Frazier in the 2nd round to win the match. Fast forward to March 21st 2017, as three men’s competitive teams in a soon to be historical night wanted to be like George Foreman and TKO Fraizer (aka Alemania) to dethrone the 2x championship and undisputed heavy weight champions of the world (or at least at Globall). Well this sportswriter was shocked by what transpired tonight, just like Howard Cosell in 1973.

To start off the night was the battle of Sporting FC taking on the Cinderella team of the league Monday Sauce. So lets say this is the probably the closest thing we will get to a Floyd Mayweather vs Conor McGregor fight. Anyways, Conor err I mean Monday Sauce was actually holding their own as they held a 1-1 tie with Sporting for most of the match that was until the final round when Mayweather err I mean Sporting came out swinging and threw quite a few punches at Monday’s face (which I’m pretty sure everyone would like to do) leaving them knocked out cold on the mat with them winning the fight err I mean match 6-2. This meant Mayweather was onto the championship game! (Author’s note go Conor! Mayweather can’t read this anyways so I’m not scared.)

Now the piece de resistance game of the night as Astoria United (George Foreman) faced off against Alemania (Joe Frazier). Based on passed seasons this sportswriter was already getting the championship paragraph written thinking it was going to be Alemania walking all over Astoria; especially since they already beat them earlier this season but Astoria put on their boxing gloves and came to fight! It all started with Astoria taking an early 6-2 lead which made the dozen or so spectators in the facility to take notice, just like when Foreman brought down the all-mighty Frazier in the first round. You can almost here Howard Cosell yelling his famous quote at that point. Unlike the fight, however, Alemania fought back to tie the game at 6-6 until Foreman threw the final knockout blow with 2 goals in under 5 minutes to seal the deal and bring down the all-powerful Alemania. (There goes $100 I’ll never see again. Now I know how it feels to be a Golden State Warriors band wagon fan last year. What, too soon? You’re all Cavaliers fans now so sit down!)

Now came the fight of all fights as Sporting FC went toe to toe with the giant slayers themselves Astoria United. With the blood of Alemania still fresh on their gloves Astoria was still hungry for more upsets as George Foreman battled Floyd Mayweather. Once they touched gloves it was on. Astoria came out firing on all cylinders as they took the early 3-0 lead over Sporting. Despite being knocked down so quickly Sporting came back up but to only bring the lead to one as they never saw the light of day throughout the match as Astoria punched them so hard in the face they were seeing stars and finally were TKOed by the score of 8-6 (which I hope is what really happens to Mayweather when he fights McGregor).

History was made tonight as the powerful kings of the league fell to their knees and became mere mortals. Frazier has fallen and has been defeated by a soon to be grill spokesman. What a shocker tonight. The only place you could have watched this historical event was right here at Globall Sports Center. You got game? We want you to play!

PS If Mayweather was able to read this then he’s probably going to hunt me down so it was nice knowing y’all!